Coins of Belgium in Euro and francs, with images, characteristics and history of the Belgian currencies 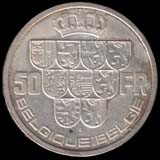 Belgium takes its name from the Belgae, a Celtic tribe living in northern Gaul. The History of Belgium before the last 175 years is entwined into that of other European countries, notably that of the Netherlands and of Luxembourg. First human settlements are dated  400,000 b.C. on the edge of the Meuse river, near the village of Spy. From 500 BC Celtic tribes settled and traded with the Mediterranean world. From 150 BC the first coins were in use.

In 54 BC, the Belgae were overcome by Julius Caesar. The Roman province of Belgica was much larger than modern Belgium. After the Roman Empire collapsed (5th century), Germanic tribes invaded the Roman province of "Gallia". One of these peoples, the Franks, finally installed a new kingdom under the rulers of the Merovingian Dynasty. The Carolingian dynasty had its roots at Herstal, in Belgium. After Charles Martel countered the Moorish invasion from Spain (732 - Poitiers), the famous king Charlemagne (born close to Liège in Herstal or Jupille) brought a huge part of Europe under his rule and was crowned as the "Emperor of the Holy Roman Empire" by the pope (800) in Aachen.

After the divisions (9th cent.) of Charlemagne’s empire, Belgium became part of Lotharingia and later of the duchy of Lower Lorraine, which occupied all but the western part of the Low Countries. Through the early Middle Ages, the northern part of present-day Belgium (now commonly referred to as Flanders) had become an overwhelmingly Germanized and Germanic language-speaking area, whereas in the southern part people had continued to be Roman and spoke derivatives of Vulgar Latin.

By 1433 most of the Belgian and Luxembourgian territory along with much of the rest of the Low Countries became part of Burgundy under Philip the Good, who strove to curtail local liberties. Simultaneously the wool industry declined, mainly because of English competition. When Mary of Burgundy, grand-daughter of Philip the Good married Maximilian I, the Low Countries became Habsburg territory. Their son, Philip I of Castile (Philip the Handsome) was the father of the later Charles V. With the death (1482) of Mary of Burgundy a period of foreign domination began. The Holy Roman Empire was unified with Spain under the Habsburg Dynasty after Charles V inherited several domains.

However, the northern region now known as the Netherlands became increasingly Protestant (i.e. Calvinistic), while the south remained primarily Catholic. The schism resulted in the Union of Atrecht and the Union of Utrecht. When Philip II, son of Charles ascended the Spanish throne, he tried to abolish all Protestantism. Portions of the Netherlands revolted, beginning the Eighty Years' War between the Netherlands and Spain. For the conquered Southern Netherlands the war ended in 1581 with the Fall of Antwerp. This can be seen as the start of Belgium as one region. That same year, the northern Low Countries (i.e. the Netherlands proper) seized independence in the Oath of Abjuration (Plakkaat van Verlatinghe) and started the United Provinces and the Dutch Golden Age. For them, the war lasted until 1648 (the Peace of Westphalia), when Spain recognized the independence of the Netherlands, but held onto the loyal and Catholic region of modern-day Belgium which was all that remained of the Spanish Netherlands.

The Belgian and Luxemburgian territories except the Bishopric of Liège were transferred to the Austrian Habsburgs (1713-1794) after the War of the Spanish Succession when the French Bourbon Dynasty inherited Spain at the price of abandoning many Spanish possessions.

During the French Revolutionary Wars, the Southern Netherlands were invaded in 1794 and annexed by the First French Republic in 1795. The conquest of most of western Europe by Revolutionary and Napoleonic France led to the franc's wide circulation.

Belgium transferred from Austria to France by the Treaty of Campo Formio (1797). After the defeat (1815) of Napoleon at Waterloo in 1815. In the Congress of Vienna, Belgium was given to the newly formed kingdom of the Netherlands under the rule of a protestant king, namely William I of Orange. Under King William I of the Netherlands, the Belgians resented measures that discriminated against them in favor of the Dutch, especially in the areas of language and religion.

The Kingdom of Belgium

A rebellion broke out in Brussels in August 1830 during a performance of Auber's La Muette de Portici at the Brussels opera house La Monnaie (Dutch: De Munt). The country wrested its independence from the Dutch, aided by French intellectuals, Catholic clergy and French armed forces. A constitutional monarchy was established in 1831, with a monarch invited in from the House of Saxe-Coburg and Gotha in Germany by the British. Belgian independence was approved by the European powers at the London Conference on July 21 1831. Prince Leopold of Saxe-Coburg-Gotha was chosen king of the Belgians and became Leopold I. A final Dutch-Belgian peace treaty was signed in 1839, and the “perpetual neutrality” of Belgium was guaranteed by the major powers, including Prussia, at the London Conference of 1838-39.

Following independence from the Kingdom of the Netherlands, the new Kingdom of Belgium in 1832 adopted its own franc (Belgian francs BEF, Dutch Belgische frank, French franc belge), equivalent to the French one, followed by Luxembourg in 1848 and Switzerland in 1850. Newly-unified Italy adopted the lira on a similar basis in 1862.

By the treaty of 1839, Luxemburg did not fully join Belgium, and remained a possession of the Netherlands until different inheritance laws caused it to separate as an independent Grand Duchy. Belgium also lost Eastern Limburg, Zeeuws Vlaanderen and French Flanders (Dutch: Frans Vlaanderen) and Eupen, four territories which it had all claimed on historical grounds. The Netherlands retained the former two while French Flanders, which had been annexed at the time of Louis XIV remained in French possession, and Eupen remained within the German Confederation, although it would pass to Belgium after World War I as compensation for the war.

The new country was among the first in Europe to industrialize and soon led the continent in the development of railways, coal mining, and engineering. Under the rule of Leopold II (1865-1909)  rapid industrialization and colonial expansion, notably in the Congo, were accompanied by labor unrest and by the rise of the Socialist party in opposition to the reactionary and clerical groups.

In 1865 France, Belgium, Switzerland and Italy created the Latin Monetary Union (to be joined by Greece in 1868): each would possess a national currency unit (franc, lira, drachma) worth 4.5 g of silver or 0.290 322 g of gold (fine), all freely exchangeable at a rate of 1:1. In the 1870s the gold value was made the fixed standard, a situation which was to continue until 1914.

Social conditions improved under Albert I (reigned 1909-34), who also granted universal and equal male suffrage (the vote was extended to women in 1948).

The Germans were stopped by the allied at the frontline along the Yser. Under the Treaty of Versailles after the war, Belgium received the strategically important posts of Eupen, Malmédy, and Moresnet, and a mandate over the two former German colonies of Rwanda and Burundi.

In 1926 Belgium as well as France experienced depreciation and an abrupt collapse of confidence, leading to the introduction of a new gold currency for international transactions, the "belga" of 5 francs, and the country's withdrawal from the monetary union, which ceased to exist at the end of the year. The 1921 monetary union of Belgium and Luxembourg survived, however, forming the basis for full economic union in 1932. 1 Luxembourg franc was equal to 1 Belgian franc. Belgian francs were legal tender inside Luxembourg and Luxembourg francs were legal tender in Belgium.

In World War II, Germany, which in 1937 had guaranteed Belgian neutrality, attacked and occupied Belgium in May, 1940. King Leopold III (reigned 1934-51) surrendered unconditionally on May 28, but the Belgian cabinet, in exile at London, continued to oppose Germany. Liberation by British and American troops, aided by a Belgian underground army, came in September, 1944.

Belgium’s industrial plant had remained relatively intact despite the war, enabling the economy to recover far more rapidly than those of the other nations of Western Europe. The immediate political issue was the return of Leopold III, who was barred from Belgium until 1950, with Prince Charles as ruler. Popular discontent led to the abdication of Leopold III (1951) in favor of his eldest son, Baudouin Ier.

During Leopold's exile in Switzerland (1945-1950), Prince Charles of Belgium acted as the regent.

An economic union between Belgium and Luxembourg, formed in 1921 (the first of its kind in 20th-century Europe), was superseded in 1958 by the Benelux Economic Union, which also includes the Netherlands. An early proponent of a united Europe and a firm advocate of collective security, Belgium is the seat of many important European Union functions and the headquarters of the North Atlantic Treaty Organization (NATO). Belgium has been member of the NATO since April 4, 1949; it is one of the founding members of the European Coal and Steel Community in July, 1952 and of the European Economic Community founded on March 25, 1957 by the signing of the Treaty of Rome.

In 1960 the Belgian Congo was given its independence, with subsequent economic and political turmoil in Belgium, especially after the eruption of violence in the Congo.

King Baudouin died in 1993 and was succeeded by his brother, Albert II.

In 1926 Belgium as well as France experienced depreciation and an abrupt collapse of confidence, leading to the introduction of a new gold currency for international transactions, the belga of 5 francs, and the country's withdrawal from the monetary union, which ceased to exist at the end of the year. The 1921 monetary union of Belgium and Luxembourg survived, however, forming the basis for full economic union in 1932.